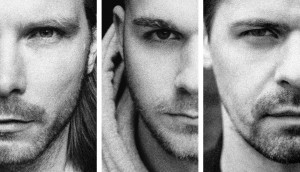 Without giving in to hyperbole, it’s fair to say that Marcel Dettmann has played a defining role in contemporary techno through his work as a DJ, producer, and label chief. The Berghain resident’s eponymous imprint, MDR, is home to a privileged inner circle of producers he also counts as friends, including Answer Code Request (AKA Patrick Gräser) and Kobosil. Gräser and Dettmann’s history goes back to when both were teenagers with skateboards in their hometown outside Berlin, where fellow MDR artists and Berghain DJs Norman Nodge and Marcel Fengler also got their start (apparently there’s something in the water). Kobosil, on the other hand, represents a generation of young Berlin-bred producers for whom Dettmann’s marathon sets provided early inspiration. Following the release of a varied and muscular MDR compilation last month, we sat down with Dettmann, Gräser, and Kobosil to find out what it’s like having Dettmann as a mentor, and what Dettmann himself is looking for when grooming talent for the label.